A 6.4 magnitude earthquake hit Southern California on Thursday, rattling nerves on the Independence Day holiday and causing buildings to shake in the strongest earthquake in the region in two decades.

A hospital in Ridgecrest near the epicenter was evacuated because of possible structural damage, police said, and video online showed a house on fire in Ridgecrest. Authorities were continuing to survey rural areas for other damage. 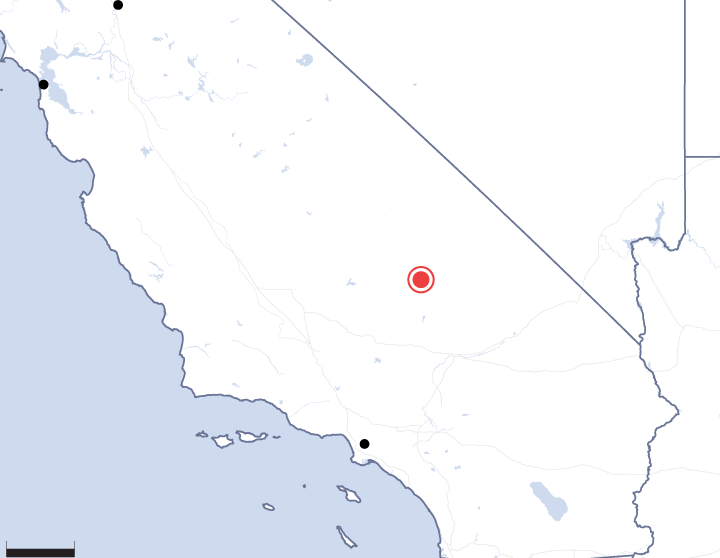 The U.S. Geological Survey said the earthquake struck at 10:34 a.m. local time near Searles Valley, a remote area in San Bernardino County about 170 miles north of Los Angeles and 125 miles east of Bakersfield. The agency initially said the magnitude was 6.6 but revised its measure downward.

Seismologists warned that aftershocks could continue for days afterward, with a small chance of an earthquake that’s even stronger than 6.4.

“This earthquake was large enough that the shaking could have caused damage,” said Rob Graves, a seismologist with the U.S. Geological Survey, at a televised news conference.

Ridgecrest Regional Hospital was being evacuated and an engineer would assess whether it had structural damage, Ridgecrest Police Captain Justin Dampier said. He said some homes had been damaged and that there were reports of gas leaks, and that Ridgecrest was opening its city hall as a shelter.

San Bernardino County fire officials said they had reports of multiple buildings with minor cracks, broken water mains, downed power lines and rock slides on some roads but no injuries or fires. Los Angeles police said they had not received any reports of damage within the city.

Lucy Jones, a seismologist and former science adviser at the Geological Survey, said at the news conference that it was the largest earthquake recorded in southern California since 1999.

People on social media said they could feel the shaking at least as far away as Las Vegas, and videos posted online showed swaying chandeliers, broken bottles of alcohol and water sloshing from swimming pools.

“i swear my bed jumped up and down at least a foot and a half,” said Ridgecrest resident Katie Woods, who said she was trying to nap when the earthquake hit. “I was just laying there hoping the ceiling wasn’t going to come down,” she told NBC Los Angeles.

Woods, who said she was about to turn 73, said she had glass broken all over her house from lamps that fell over, and that she was still feeling aftershocks.

At least one Fourth of July parade that was in progress during the earthquake continued with little interruption, according to NBC Los Angeles.

Amanda Callaway, 36, said she was driving home in Ridgecrest with her fiancé when they thought their car had lost a tire.

“We go to pull off the road and we see that the road is moving,” she said. “We could see the rippling in the road.”

We felt the earthquake, did you? Please only use 911 to report emergencies. Non emergencies in the City of Los Angeles use 877-ASK-LAPD.

How people in the region experienced the quake would depend on factors such as how far they were from the epicenter and the makeup of nearby soil, Jones said. For some people, it likely felt more like rolling waves than shaking, she said.

“Even in the L.A. area we’ll have disparity in terms of the reports of the shaking,” she said.

The Geological Survey was sending seismologists out into the field on Thursday to investigate which fault lines were involved, Graves said.

Los Angeles County Fire Inspector Brian Stevens told NBC Los Angeles that the earthquake was a reminder for people in earthquake-prone areas to think about what they would do in a more extreme situation. “It’s a good idea to get prepared with an earthquake emergency preparedness kit,” he said.