May 16, Kathmandu. One person has died of corona virus (Covid-19) in Nepal. The Ministry of Health and Population has confirmed that a 29-year-old woman from Barhabise, Sindhupalchok, died from Covid-19.

She had a normal delivery at the TRI Teaching Hospital 10 days ago. Both the mother and son were in normal health and they were discharged on the 25th and returned home.

But she had a fever and a cough and had trouble breathing. He died on the way to Dhulikhel Hospital after he did not recover from treatment at Barhabise Primary Health Center.

she had similar symptoms and tested positive for PCR.

Her report is also positive in the test done at the National Public Health Laboratory. However, the Ministry of Health and Population had sent a study team to Dhulikhel Hospital on Saturday before announcing that his death was due to Corona.

Based on the team’s report, the ministry announced that his death was caused by Corona. The ministry said in a statement on Saturday evening, “Detailed details have been taken and further tests related to Covid-19 have confirmed that this is the first case of death from Covid-19 in Nepal.” 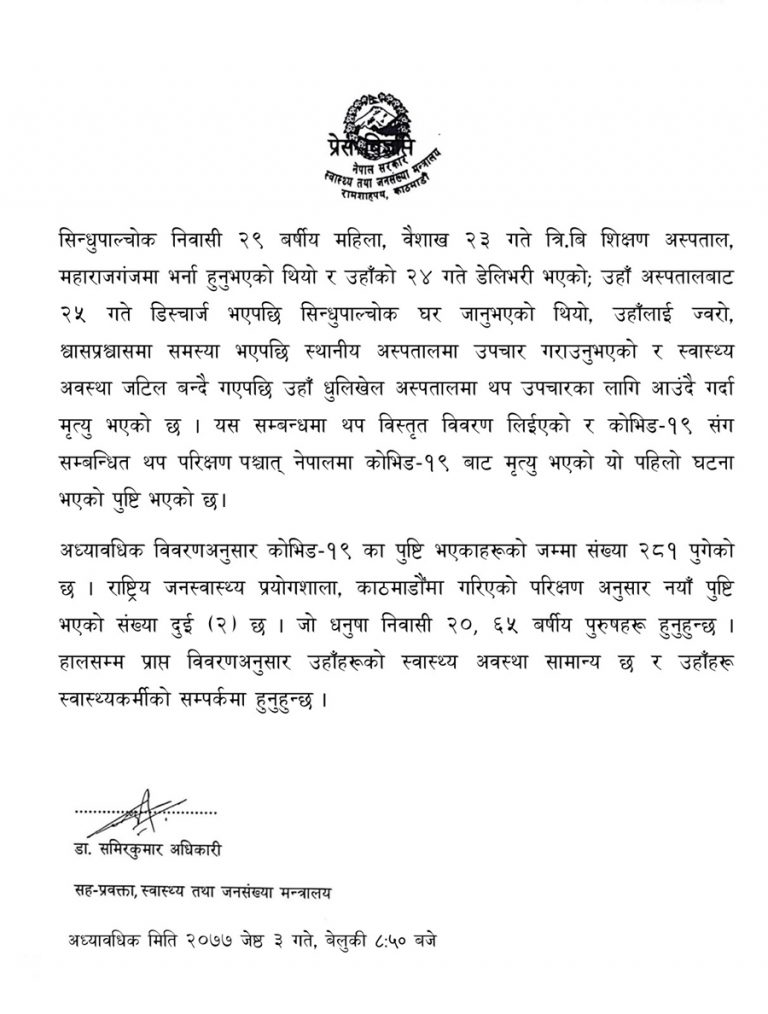 This is how the funeral is done

The government has formulated a separate procedure for the management of corpses of people who have died due to COVID-19.

The deceased will be buried at Pashupati Aryaghat-based electric crematorium on Saturday.

According to the procedure, the participants should wear PPE including gloves, glasses, hat and mask at the funeral. Relatives of the deceased are not even allowed to touch the body. If the relatives want to see it, they will be allowed to look at it one by one from a distance of at least one meter.

According to him, the village has also been sealed as he went to visit his relatives from his native village. No one will be allowed to come out of the sealed ward and enter the ward.

The Covid-19 Disaster Management Center of the district has urged the residents of the area not to go out of their houses. Army and police have also been deployed in the sealed area.

Similarly, the Barhabise Primary Health Center has also been sealed. It has also been decided to trace the contact of the person in contact with him, collect swabs for PCR test and keep him in quarantine.